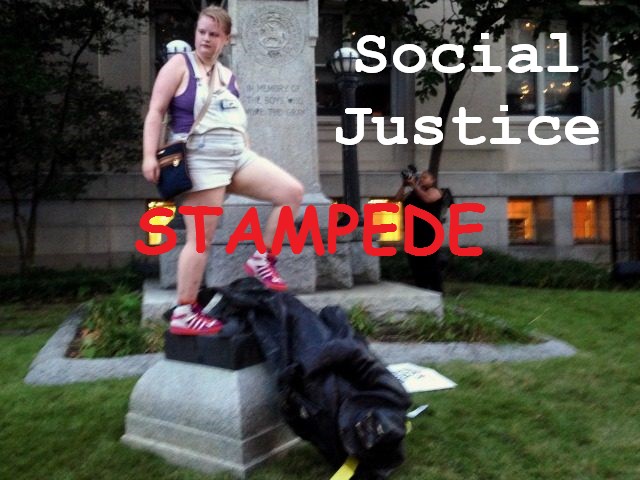 A bull-like stampede of social justice warriors toppled a statue of a confederate soldier which had stood outside the old courthouse on Main Street in Durham, NC for over 90 years.

Evidently emboldened by the riots in Charlottesville, VA over the weekend, the group of guilty white liberals and black activists tore down the statue and subsequently gave the hunk of metal an epic beatdown.

How raw. How edgy. How progressive. Let’s tear down a statue and kick it and give it the finger. Down with whitey – Yay, social justice!

You people are utter buffoons. Kicking and insulting an inanimate object is your idea of a revolution against ‘The Establishment’, is it? Please. You’re nothing but useful idiots for left-wing Establishment.

In response to temper tantrums such as the spectacle in Durham, more statues and monuments all over the south will be taken down. Way to promote reason and sanity government officials. Way to go.

I don’t even know what to say about this madness anymore. If these ‘alt-left’ people are so mentally fragile that a statue sparks such a deeply emotional and destructive reaction, then I think they have far more pressing problems to deal with than iconography of long dead Confederates. Perhaps they should start addressing the rampant mental illness that seems to be plaguing their group.

For more on the breakdown of civil discourse in America, read yesterday’s Daily Dose | Charlottesville : An Open Letter

Protestors in #Durham destroying a statue.

Why is there zero consequences for this type of behavior?

This is NOT acceptable. pic.twitter.com/l48O0Hvv9E

The violence against a statue accomplishes absolutely NOTHING.

So you liberals understand. pic.twitter.com/ymlPEusGEI

#Durham County Sheriff- here's a pic of a sow who most likely helped tear down the statue. pic.twitter.com/U86W8qZcFu

The supreme art of war is to subdue the enemy without fighting.