United Airlines and the Price of the Illusion of Security

If you want a vision of the future, imagine a boot stamping on a human face – forever.

Flying the skies with United Airlines doesn’t seem so friendly anymore after numerous videos emerged of a passenger being forcibly removed from United Express Flight UA3411 at Chicago O’Hare International Airport on April 9.  The passenger, now identified as Dr. David Dao, was among three others forced to leave the over-booked flight after the airline’s automated system randomly selected them to give up their seats to airline staff needing to be transported to Louisville, KY.

When Dr. Dao refused to vacate his seat when ordered, Chicago Aviation Security Officers forcibly removed him from it, slamming his head into an armrest, bloodying his face, and dragging him seemingly unconscious through the aisle. Fellow passengers can be heard in the videos expressing their disgust at the harsh treatment Dr. Dao received throughout the incident.

United has come under a social media firestorm of public criticism for their handling of the situation. United CEO Oscar Munoz first issued a public apology saying, in part, “This is an upsetting event to all of us here at United. I apologize for having to re-accommodate these customers.” Re-accommodate? (Insert Orwellian Newspeak reference here)

Public anger toward the airline further intensified when an internal company memo to staff, penned by Munoz, surfaced Monday. In the memo, which was labeled as “tone-deaf” by many in the media, Munoz states, “facts and circumstances are still evolving, especially with respect to why this customer defied Chicago Aviation Security Officers the way he did.”  He goes on to praise the staff and insists that they were “following established procedures” for such situations. He goes on to say, “this situation was unfortunately compounded when one of the passengers we politely asked to deplane refused and it became necessary to contact Chicago Aviation Security Officers to help.”

United Airlines has since gone into damage control mode, with Munoz penning a second memo to staff Tuesday; a memo with a completely different tone.

The truly horrific event that occurred on this flight has elicted many responses from all of us: outrage, anger, disappointment.

I share all of those sentiments, and one above all: my deepest apologies for what happened.
Like you, I continue to be disturbed by what happened on this flight and I deeply apologize to the customer forcibly removed and to all the customers aboard.

No one should ever be mistreated this way.
| United CEO Oscar Munoz |

That’s quite a change from the tone of his original response. It’s clear that public pressure brought about this change in tone, but it’s just an attempt to curry public favor in the midst of a PR disaster. If this was truly Munoz’s view of the situation, why not say so to begin with and avoid all the controversy? It’s then reasonable to assume that his first response represents what he truly believes. I think it’s highly doubtful that this second memo represents a real change of heart by Munoz and United Airlines. It’s likely just Munoz trying to cover United’s a** by telling the masses what they want to hear. In short, it’s irrelevant.

What is relevant is the fact that United placed protocol before principles, created a volatile situation, then had the gall to imply that the customer was mostly at fault for the incident. Dr. Dao refused to comply with authorities, end of discussion. Never mind that he no doubt felt his objections were warranted as he had paid for the seat and been allowed to board. Never mind that he was randomly selected to be deplaned, Hunger Games tribute style, because United chose to overbook the flight. Never mind that the authorities treated him worse than the law would allow an animal to be treated. He dared to show defiance toward the authorities, therefore his harsh treatment was justified.

I believe this is the mindset behind the cold tone-deafness of Munoz’s original memo. It’s the same mindset that encouraged a plane full of people to sit by obediently and watch as another human being was unjustifiably and brutally assaulted by authorities. It’s the mindset that the American people have been indoctrinated into at every opportunity since 9/11/2001.

The State is your master and you will submit.

Since 9/11 many Americans have been completely willing to give up their rights and freedoms to the government in exchange for security. Things like the USA PATRIOT Act, domestic surveillance of US citizens, and the invasive searches conducted on airline passengers by the TSA have all garnered support from huge numbers of Americans. Why? Because people are often fearful and they desire security, even if it’s just the illusion of security.

This is the price of that illusion.

In the years since the horror of 9/11, government and law enforcement agencies have been all too eager to provide us with the illusion of safety for the small price of our privacy, our dignity, and our God-given human rights. We have since been systematically conditioned to accept the ever-increasing presence of the authorities in both our public and private lives, and to accept whatever enforcement methods they adopt, because it’s in the interest of our collective security. The more we’ve grown accustomed to the increasing power of government over our lives, the more accepting we’ve become of their increasingly totalitarian behavior toward us.

America’s post-9/11 rush into the authoritarian arms of a Big Brother-style police state has created a weak-minded, fearful society populated by obedient servants to an increasingly iron-fisted master.

This brings us back to Munoz’s “tone-deaf” staff memo. His initial criticism of Dr. Dao was to question why he “defied Chicago Aviation Security Officers the way he did”. Later in the memo, he further notes that Dao “ran back on to the aircraft in defiance of both our crew and security officials”. Why on earth would anyone defy an order from the authorities, even if they believe it unjust? I find it amusing that Munoz would question the motives of someone who would do such a dreadful thing as defy the authorities.

Dao refused to give up a seat he paid for and from which felt he was being unjustly evicted. Keep in mind, this situation was entirely created by the bad policies and poor planning of United Airlines. Regardless, the airline was willing to order authorities to flex the muscles of the post-9/11 security state on their behalf.

The tone-deafness of Munoz’s memo was, I believe, informed by more than just a desire to circle the wagons around United. I believe his reflexive dismissal of responsibility onto the shoulders of a beaten and battered, 69 year old man exemplifies how entrenched America’s collective “the State is always justified and must always be obeyed” mentality has become. This mindset is evidenced by the fact that Munoz thought it appropriate to deflect the blame onto Dao primarily on the basis that he had defied the authorities. He refused an order, case closed. But, does verbally defying the authorities really justify being knocked unconscious? I say no. However, in our modern police state, individual rights and dignities are a luxury we can’t afford.

Dao’s defiance wasn’t a literal crime – it was a thought-crime. Dao committed the unpardonable sin against the church of State power. He refused to submit, and non-compliance will not be tolerated. 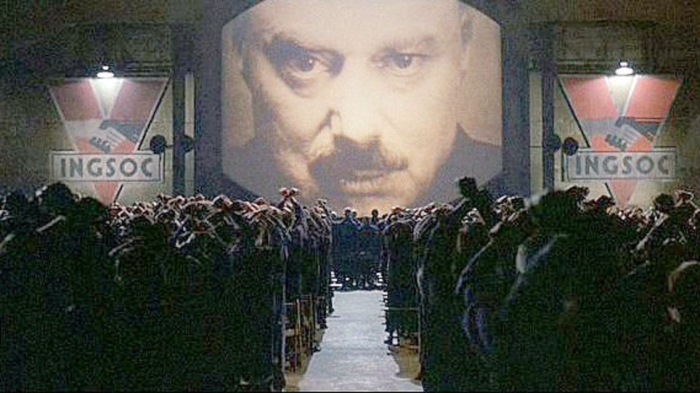 Image from the film adaptation of George Orwell’s 1984

We have come to a point in America where we are willing to suffer any amount of injustice and indignity at the hands of the State as long as we’re told it’s in our overall best interest. We have allowed, and even begged, for the creation of a police state to protect us from whatever we’re told to fear. Terrorists, criminals, Russians, Martians, whatever. We have become obedient Statists, enslaved to a fear-machine fueled by a super-octane security state.

We have adopted a dangerous, collectivist mindset which dictates that the rights of the individual should be placed under the heel of the right of the State to supplant those rights at will. In short, one must always obey the authority of the State, and submit to their demands. I find this a terrifying prospect given that totalitarian governments have killed hundreds of millions of their own citizens in the last century alone. But, I digress.

During the process of desperately clinging to our delusions of State benevolence and the illusion of security, we have betrayed our own humanity. We have exchanged what is morally right and acceptable for what the State tells us is right and acceptable. We have chosen to imprison ourselves in a cell block of enormous State power in exchange for believing that our shackles will provide us security. We have become psychologically entangled with our own oppressors and trapped in a kind of Statist Stockholm Syndrome.

The United Airlines flight UA3411 fiasco serves as an example of the cost of our addiction to and reliance on State power. Benjamin Franklin famously said, “those who would give up essential liberty to purchase a little temporary safety deserve neither liberty nor safety”. The true cost of our purchase of safety just became a bit more clear.