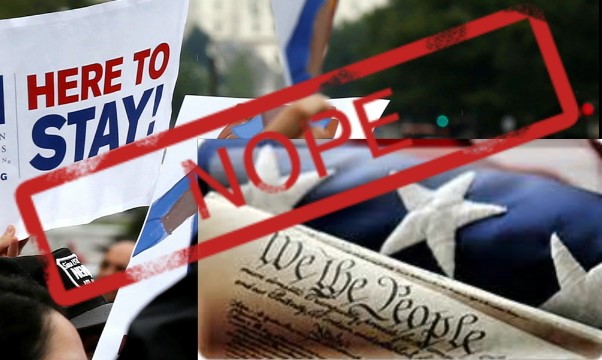 “I’m here today to announce that the program known as DACA that was effectuated by the Obama administration is being rescinded,” Sessions said, addressing reporters at the Department of Justice on Tuesday. Effective immediately, DACA will be rescinded by a memorandum from Acting Secretary of Homeland Security Elaine Duke, and no new applications for deferred status will be accepted after Tuesday. However, no current beneficiaries will lose protected status for six months. In addition, DACA recipients whose status expires during this six month grace period will be able to apply for two-year renewals until October 5, 2017 and those who have already applied for their two-year renewals will have those requests processed.

Facing lawsuits from 10 states if an end to DACA was not announced by September 5, the Trump administration had to act decisively to end the program. As President Trump noted in his official statement on the end of DACA, the program was legally indefensible;

The Attorney General of the United States, the Attorneys General of many states, and virtually all other top legal experts have advised that the program is unlawful and unconstitutional and cannot be successfully defended in court.

There can be no path to principled immigration reform if the executive branch is able to rewrite or nullify federal laws at will.

Attorney General Sessions echoed the President’s statement in his own, quoting George Washington University Law School Professor Jonathan Turley’s testimony on DACA before the House Judiciary Committee as to the unconstitutionality of Obama’s unilateral DACA creation:

In ordering this blanket exception, President Obama was nullifying part of a law that he simply disagreed with … If a president can claim sweeping discretion to suspend key federal laws, the entire legislative process becomes little more than a pretense … The circumvention of the legislative process not only undermines the authority of this branch but destabilizes the tripartite system as a whole.

Congress, get ready to do your job – DACA!

Despite the President’s assurances that the winding-down of DACA will be a, “gradual process, not a sudden phaseout” and that the program won’t just be “cut off”, a predictable maelstrom of emotional sophistry from Washington has ensued.

Subjecting Dreamers to mass deportation is part of the bigoted policies that are a cornerstone of @realDonaldTrump’s admin. #DefendDACA

In the wake of the President’s heartless decision to end DACA, Congress must immediately pass the bipartisan DREAM Act to protect #DREAMers

Senator John McCain, one of Trump’s frequent Republican critics, said in a statement, “The 800,000 innocent young people granted deferred action under DACA over the last several years are pursuing degrees, starting careers, and contributing to our communities in important ways. While I disagreed with President Obama’s unilateral action on this issue, I believe that rescinding DACA at this time is an unacceptable reversal of the promises and opportunities that have been conferred to these individuals.”

Predictably, the lefties in the mainstream media have echoed Washington’s histrionics over DACA in recent weeks with headlines like Vox’s, DACA, explained: why Donald Trump holds the fate of a generation of immigrants in his hands, Daca immigrants terrified as President Trump decides their fate from USA Today, and The Hill decrying the program’s end because, DACA is a crusade to help children.

The mainstream media: Shamelessly manipulating the public through emotional propaganda.

To see this emotional manipulation in action, look no further than this image from a Vox article published Tuesday morning entitled, Trump just turned DACA into a ticking time bomb for 800,000 immigrants. 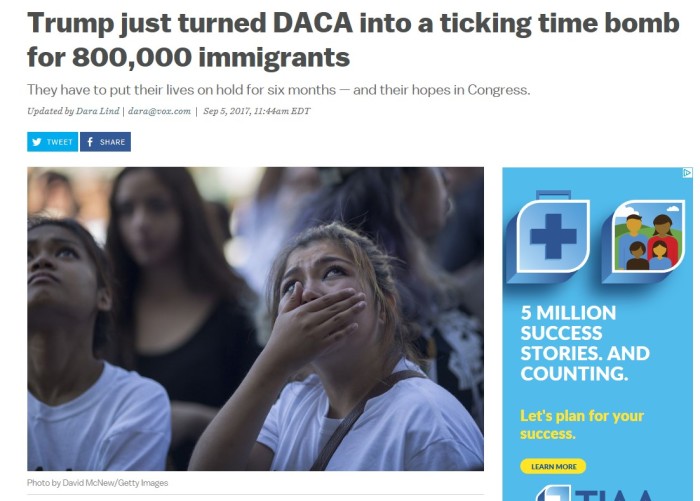 Observing the hysteria surrounding the end of DACA, one would think Trump has ordered 800,00 children be remanded to Dachau.

Of course, the truth is far less terrifying.

First, DREAMers are not children. Though many were quite young when arriving in the U.S., the majority of DACA recipients are currently in their 20s. The ‘DREAMers are kids’ narrative is a naked attempt by DACA supporters to garner misguided sympathy for their cause. 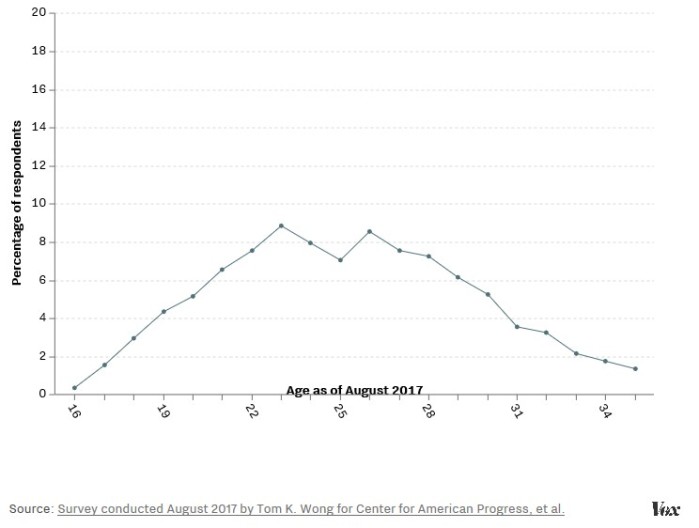 Despite DACA’s official end on paper, President Trump has stated that the administration’s immigration enforcement priorities ‘remain unchanged’, saying that they are, ‘focused on criminals, security threats, recent border-crossers, visa overstays, and repeat violators’. He further states that DHS has been advised that, ‘DACA recipients are not enforcement priorities unless they are criminals, are involved in criminal activity, or are members of a gang’.

In other words, as long as DREAMers stay out of legal trouble, there’s little chance they will ever be deported.

Trump’s admission that he intends to continue the Obama administration’s lack of immigration policy enforcement falls short of the hardline stance the President took against illegal immigration on the campaign trail. He routinely stood on the rule of law platform and made it clear that illegal immigrants are to be subject to enforcement of federal immigration law regardless of how or when they came to be in the country. In today’s statement, President Trump reaffirmed his belief that his ‘highest duty is to defend the American people and the Constitution of the United States’. However, he also makes clear that he does not wish to punish, ‘children, most of whom are now adults, for the actions of their parents’.

This is contradictory. Either immigration law is to be enforced universally, or exceptions to enforcement are to be made, thus nullifying the rule of law. The President cannot have it both ways.

Mr. Trump had promised to rescind the program upon taking office yet, after nine months of skirting the issue, his hand had to be forced by the threat of impending lawsuits. Add to that the fact that his administration will continue the very lack of law enforcement that Trump campaigned against.  His contradictory messaging on DREAMers since taking office, and his seeming unwillingness to stand firm on immigration enforcement will no doubt upset his base of devoted supporters, many of whom are deeply opposed to DACA (or any form of amnesty for illegal immigrants).

Congress now has 6 months to legalize DACA (something the Obama Administration was unable to do). If they can't, I will revisit this issue!

It seems clear from President Trump’s stated intention to continue the Obama administration’s weak enforcement policies that he does not really want to deport the DREAMers. It seem clear that Trump is kicking the can down the road to Congress for the next six months, but will ‘revisit’ the issue if they don’t ‘legalize’ DACA. Does this mean that Mr. Trump is in favor of enshrining DACA, an amnesty program, into permanent U.S. law? If so, this is the biggest public departure from his own previous statements and from his base the President has ever made. The majority of Trump’s fiercest support has come from people who oppose amnesty for illegal immigrants, period. Trump’s seemingly softened position on deporting DREAMers will (and rightly should) anger some of his most dedicated supporters.

President Trump not only runs the risk of angering much of his base, but has also placed congressional Republicans in a no-win situation. They are now forced to either support enshrining an amnesty program into law, angering the party base, or refusing to cooperate with Trump on immigration reform, also angering the party base. With midterm elections on the horizon, DACA may now place Republican members of congress in a precarious political position.

In addition to the potential damage to Republicans prospects in 2018, Trump’s DACA announcement also places the Democrats in an unenviable political position. If they work with the Republicans to make DACA (or some version of it) law, no doubt funding for Trump’s border wall will be a part of any deal that is placed on the table. If they refuse to negotiate with Republicans, DACA ends and all protections recipients enjoy will just evaporate. Either way, the Democrats, like the Republicans, will surely anger their own supporters regardless of which option they choose.

Attempting to undo the Constitutional damage done by Obama’s executive overreach in creating DACA is the right thing to do. However, the wisdom of ending it this way remains to be seen.

Congressional catch-22s aside, the reality of ending Obama’s DACA program seems a far cry from Nancy Pelosi’s assertion that it’s a ‘despicable assault on young people’ that will ‘destroy hundreds of thousands’ of patriotic lives.

‘Patriotic’? Is it patriotic to thumb your nose at the U.S. Constitution and demand that the law of the land not apply to you? How about routinely committing felonies like identity theft and social security fraud; another patriotic display? What about the 57 billion dollar tax bill Americans must foot every year as a result of illegal immigration; More evidence of illegal immigrants’ devotion to the prosperity of the nation?

Despite John McCain’s insistence that DACA recipients are ‘innocent young people…pursuing degrees, starting careers, and contributing to our communities in important ways’, the reality is starkly different. Most illegals protected under DACA are not college students or graduates. An August 2013 report by the pro-amnesty Migration Policy Institute showed that only 7.5% of the 800,00 DACA recipients over the age of 18 had a four-year degree or more. Also, the MPI released another study just last month which found that of 832,000 DACA recipients aged 18 + only 5% had four-year qualifications. In addition to the MPI, a study conducted by a Harvard scholar revealed that only about 20% had ever attended a four-year college, meaning the bulk of DACA recipients never went beyond high school.

Strange that John McCain, Nancy Pelosi, and their minions in the media pay a lot of lipservice to ‘The American Dream” yet seem to have no concept of what allows that dream to be a reality – Law and order.

Famed philosopher John Locke wrote, “The end of law is not to abolish or restrain, but to preserve and enlarge freedom. For in all the states of created beings capable of law, where there is no law, there is no freedom”. The “American Dream” exists because of the constitutional framework upon which the nation rests. As President Trump observed in his statement today, “we must also recognize that we are a nation of opportunity because we are a nation of laws”. Bending, twisting, ignoring, and otherwise breaking the constitutional rule of law for any group threatens  the very foundation of the “American Dream”.

The “American Dream” cannot and will not exist apart from the nation’s commitment to the Constitution. As John Adams observed we are, “a government of laws, and not of men”, meaning that governing principles must never be subjugated to the desires and whims of individuals. The law is the law. Period.

If America is to be a nation of laws, then the law must apply equally to DREAMers and oligarch presidents alike.

President Obama failed to respect the legal separation of powers when he enacted DACA, and now President Trump is merely trying to repair the constitutional damage. By ending DACA Trump is not, “betraying the fundamental values of the ‘American Dream'”. On the contrary, upholding universal rule of law ensures that dream does not dissolve into a nightmare.

Sadly, President Trump has announced plans to continue down the Obama administration’s path of appeasing sympathetic emotions rather than enforcing immigration law. In light of this, rescinding DACA seems more like an empty gesture rather than a genuine defense of the Constitutional framework that makes the ‘American Dream’ possible.

I simply oppose The Dream Act & these are the responses I get (few pages). Now, is this really the team you want to be part of? #DACA pic.twitter.com/ebvOSGhFvC

The end of law is not to abolish or restrain, but to preserve and enlarge freedom. For in all the states of created beings capable of law, where there is no law, there is no freedom.
| John Locke |