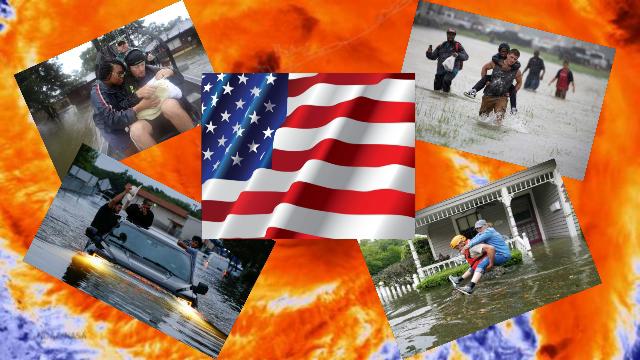 “I’m going to try to save some lives,” a man from Texas City told a reporter as he prepared to launch his boat into the flooded streets of Houston Texas.

After Hurricane Harvey dumped record amounts of rainfall on Houston, and other Texas cities, thousands of people were left stranded by unprecedented amounts of flooding. In the aftermath of this horrible natural disaster people, like the man quoted above, have come from far and wide to assist in the ongoing search and rescue efforts. These ordinary people are selflessly giving of their time, energy, and resources to help a hoard of storm-ravaged strangers simply because they need help.

Captured in the footage of Harvey’s aftermath are countless deeds of kindness, courage, generosity, and goodwill. This constantly growing library of video vividly depicts the sadness of loss, the joy of reunion, the anxiety of waiting, and the relief of rescue. Amidst the tempest of emotion caught on camera, there’s one emotion that is noticeably absent; Anger.

In the last few weeks, the growing social and political divisions between Americans have widened considerably. Since the events in Charlottesville, VA two weekends ago, in which alt-left groups like Anitfa violently clashed in the streets with alt-right demonstrators at the Unite the Right rally, it seems hostility and political division in the nation has reached a fever-pitch. There’s no debate, no reasoning with one another; just name-calling, punch-throwing, and statue-toppling. Indeed, Charlottesville’s aftermath has largely brought out the worst in the American people.

How sad that it takes a disaster the magnitude of Hurricane Harvey to bring out our best; Our humanity.

In the hours of Hurricane Harvey rescue footage, I’ve yet to see people argue with one another. I’ve heard no one yell, “racist”, “bigot”, “Nazi”, or “Fascist”. I’ve seen no fistfights, pepper spray, clubs, nor bricks. I’ve seen no identity politics or vacuous moral grandstanding. All I have seen is people helping others simply because they are people in need.

“I’m going to try to save some lives,” said the man from Texas City. He didn’t say black lives, or white lives, young lives, or old lives, rich lives, or poor lives – He just said lives. In times of tragedy, differences in worldview, political affiliation, and skin color never seem to matter. Those things disappear in the face of our shared sense of sympathy for one another’s adversity. It seems people somehow always rediscover their humanity in the midst of disasters such as Hurricane Harvey. Amidst the violent turmoil of the storm, people made peace with one another.

This gives me hope for America’s future. It reminds me that people have the ability if not always the desire to put aside their differences and work together for good. We can choose to be respectful and kind to one another, rather than vitriolic and violent. We certainly don’t have to agree, but we must strive to remain civil in our discourse. We all must cling tight to our humanity if we are to have any hope of weathering the social and political storms raging within our nation.

#Hero An officer who worked throughout the night on water rescues until he couldn't stand. #HurricaneHarvey pic.twitter.com/DSWfaKgG1z

I just feel like everybody should watch this 😩❤️🙏🏽 #PrayforTexas #Hurricaneharvey pic.twitter.com/gjVRBAZU5g

They couldn't save their home but they can save their dogs. 1 of the many families w/ pets struggling because of floods. #Hurricaneharvey pic.twitter.com/nDZYD3dMjb

#Police saved the lives of a herd of cattle from the #HarveyFlood in Dayton, TX#HoustonStrong#HurricaneHarvey pic.twitter.com/UelzYBXzIA

If you have lost your pet in #HurricaneHarvey contact the local shelters they have been collecting the animals and bringing them to safety. pic.twitter.com/3pqrtQh5t1

To love our neighbor as ourselves is such a truth for regulating human society, that by that alone one might determine all the cases in social morality.