Addressing reporters from Trump National Golf Club in Bedminster, N.J., Thursday, President Donald Trump declared the abuse of opioids in the United States to be a ‘national emergency’ :

There’s no doubt opioid-related deaths have been on the rise in recent years, but is the ‘Opioid Crisis’ really ‘a serious problem, the likes of which we have never had’?

The media has devoted copious amounts of coverage to the so-called “Opioid Crisis” in recent years. A barrage of non-stop, often hyperbolic reporting has elevated the issue to near boogeyman status in the collective American psyche (Not unlike the over the top reporting on crack in the 1980s that lead Americans to falsely believe that ‘crack babies’ were an epidemic).

Trump’s declaration of war on this opioid ogre will surely seem to be just what the doctor ordered for millions of Americans. Finally, someone steps forward with a plan to drag this menacing monster from the national closet.

But what if there is no monster?

Prescription opioids are not the boogeyman

Prescription opioid addiction in America is a problem. However, it’s not as large a problem as much of the media would have you believe. In fact, CDC estimates of addiction rates among opiate users range from 0.7 percent to 6 percent2. Research suggests that the number of opioid abusers who are legal prescription holders is actually quite small. A 2016 report from Castlight Health titled, The Opioid Crisis in America’s Workforce, reveals :

Their research, based on 5 years of Castlight’s medical and pharmacy reporting on over 1 million Americans,  suggests that less than 5% of opiate prescription holders are actually abusing their prescriptions. Also note that this small group accounts for nearly 1/3 of total opiate prescriptions and 40% of spending. In other words, those infamous doctor shopping, drug-seeking opioid abusers you’ve surely heard about represent a small fraction of all patients receiving opioid prescriptions.

Blue Cross and Blue Shield provides some additional supporting data for the small number of opioid patients who abuse their medications. The insurance provider found that 21% of BCBS comercially-insured subscribers had filled an opioid prescription in 2015. Of this group of members, 8.3 out of 1,000 had been diagnosed as having ‘opioid use disorder’. Though BCBS says the percentage of subscribers with this disorder has soared by over 400% in the last 5 years, they admit the spike may be due to ‘increased awareness of the disorder’. Regardless of the cause of the increase, the overall number of subscribers with a possible opioid addiction remains relatively low overall given that opiate abuse is purported to be at crisis levels, and now constitutes a ‘national emergency’. 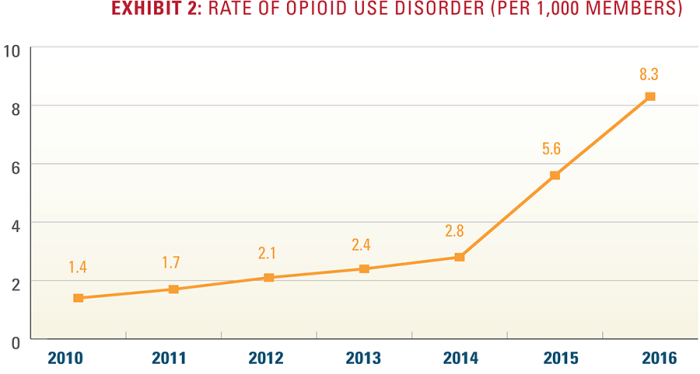 The fact is that legal prescription opioid users have very little to do with the overall problem of opioid abuse, yet they are increasingly paying the price for it in the form of forced reductions of both the supply and prescribing of narcotics. An ever-growing group of legitimate patients are reportedly having their needed pain medications reduced, or taken away all together in the wake of this ‘crisis’.

The problem with this kind of heavy-handed, prohibitionist approach to reducing opioid prescribing is that it has created a crisis of it’s own; Millions of patients with untreated and/or undertreated pain. They’re the collateral damage in the whirlwind of America’s anti-opioid fury – the real human cost.

If the media is so concerned for the public’s health and well-being, why the radio silence on such a real healthcare crisis facing millions of Americans? Could it be because the mainstream media is the federal government’s lapdog and operates as its anti-opioid propaganda factory? Just a thought.

Underprescribing of opioid pain medications, and the subsequent needless human suffering it creates, is certainly reaching a crisis level in America. Yet most reporters aren’t exactly pecking away at their keyboards writing headline stories about the tragedy of America’s ‘opioid-free pain crisis’. Instead, they’re pounding out an endless stream of ‘Opioid Crisis’ fear-mongering, replete with prescription drug buzz-words like ‘Oxycontin’, ‘Vicodin’, and ‘Fentanyl’, to fill the headlines.

This prescription drug alarmism in the media directly harms pain patients by fostering a general attitude that opioid medications are frightening and inherently bad. Unqualified messages of “opioids are bad” repeated over and over becomes “Prescriptions for opioids are bad”. The two have become interchangeable in the minds of many people. By extension, the  5 – 8 million patients in the US who receive opioids for pain, are now often perceived as doing something wrong for receiving a perfectly legitimate (centuries old) treatment. This is not right.

The media’s salacious and irresponsible reporting on prescription opioids has encouraged a witchhunt against millions of innocent people who are now routinely treated as criminals for the crime of being injured or ill and seeking relief. And as these pagan pain patients are lashed to the stake by the mainstream media, a propagandized and fearful America seems all too eager to light the ‘Opioid Crisis’ pyre beneath their feet.

The mainstream media has spent years meticulously weaving the terrifying narrative of the ‘Opioid Crisis’. It’s a dramatic tale that’s as packed with medicinal monsters as it’s hypothetical exam rooms are with pill poppers. In the ‘Opioid Crisis’, the media has constructed a devil out of selective details, while intentionally leaving gaping holes in the overall story.

Those holes need to be filled.

When it comes to the ‘Opioid Crisis’, Americans’ fears regarding prescription drugs have become like those of the inhabitants of 17th century Salem; hysterical and largely unfounded.

What’s in a name?

Constant name-dropping of drugs like Vicodin and Oxycontin may be good click-bait, but this practice paints an incomplete and largely inaccurate picture of America’s so-called ‘opioid crisis’. This ‘crisis’ goes far beyond prescription drug use, and even beyond dreaded street drugs like heroin and the feared newcomer called ‘Gray Death‘.

In fact, there is no opioid crisis.

The vast majority of opioid-related deaths are due to the mixing of an opioid with alcohol or another drug such as benzodiazapines (a class of tranquilizer). New York state provides detailed data regarding drug mixing in deaths involving opioid drugs. In 2011, a Data Brief on Unintentional Opioid Analgesic Poisoning (Overdose) Deaths in New York City provided the following information regarding deaths from drug mixing :

• In 2011, benzodiazepines were involved in half of opioid analgesic deaths.

• Alcohol was involved in 36% of opioid analgesic deaths.

Most states don’t provide such detailed information about drug mixing on death certificates. However, with these statistics from a large state like New York, it’s a reasonable assumption that the cause of the overwhelming majority of opioid-related overdose deaths across the country are actually due to mixing an opioid with a second opioid, other drugs, or alcohol. If that’s the case then 9 out of 10 deaths attributed to opioids are are also attributable to alcohol or other drugs.

That’s why I’m saying there’s no actual opioid crisis. Illegal opioid abuse is a contributing factor to the rise in US drug-overdose deaths in recent years, however it’s hardly the only one.

Raise a glass, raise your risk

There’s a far more prevalent health crisis that is unlikely to ever be deemed a ‘national emergency’ by Donald Trump, or any other American politician for that matter. That crisis is alcohol abuse.

Alcohol-induced deaths are at a 35 year high according to the CDC. According to their report, more Americans died in 2014 from alcohol-induced causes  (30,722) than from overdoses of prescription painkillers and heroin combined (28,647). The number of fatalities listed here don’t include alcohol-related deaths due to things like drunk driving, homicides, etc. When those statistics are added, the annual the number of deaths directly or indirectly attributable to acohol approaches 90,000 – more than 3x the amount of deaths attributable to opioids. So where’s the declaration of an alcohol abuse ‘national emergency’? Or even the oft-used ‘crisis’ label? Isn’t a 35 year high alcohol-induced fatality rate a crisis? Isn’t the 37% increase in such fatalities since 2002 a crisis? Isn’t 24 million American adults consuming 10 + drinks a day a crisis?

Contrary to the media hype surrounding the dangers of opioids, alcohol has actually been shown to be the most deadly recreational drug on an individual level, surpassing such drugs as herion and cocaine to claim the title.
It’s also important to note that alcohol plays a siginficant role in the number of annual opioid-related overdoses. The CDC reports that alcohol plays a role in roughly 1 in 5 deaths  related to opioid use. Increased rates of alcohol use have been observed in the US since the late 1990s. Perhaps the concurrent rise in opioid-related deaths is partly related to the trend of increased alcohol consumption. (This is pure speculation on my part, but it’s something to consider)

Given the myriad dangers associated with excessive drinking, why is there no similar urgency to combat America’s problem with alcohol?

Perhaps it’s because going after alcohol is difficult due to its status as a socially acceptable vice, a status “drugs” do not share. Or maybe it’s because alcohol abuse is more widespread and therefore a more difficult issue than the government wishes to tackle. Or, maybe, this battle is being waged largely on behalf of the pharmaceutical industry who is waiting in the wings to dose the public with new (far more profitable) non-opioid medications; something that Trump’s announced opioid ‘national emergency’ plan specifically supports.

In my humble opinion, it’s mostly the latter.

The problem with President Trump’s opioid ‘National Emergency”declaration is that it seems largely based on popular misconceptions regarding opioids and their dangers, rather than on actual data and research. His alarmist proclamation will only further fuel the fires of America’s fevered, overblown imaginings; an epidemic of crazed smack heads and pill-poppers lurking around every corner and inside every doctor’s office.

This is a fantasy.

To be clear, I’m not making a case that opioid abuse isn’t a serious problem. I’m saying that it’s only one part of a much larger problem and pattern of substance abuse in the US. Opioids are merely the current poster boys of drug abuse, and the so-called ‘Opioid Crisis’ is far from the monolithlic epidemic it’s cracked up to be.

As long as the public continues to value rhetoric over reason in the ongoing debate surrounding opioids, the fantasy will continue, the ‘crisis’  will remain, and people will continue to die.

Even robots have figured out that Communism sucks.

Sargon of Akkad discusses a pair of chat bots who were disabled for expressing their opposition to communism.

Also don't forget this list of users that are on the potential "Need to shadowban" document.

“It is dangerous to be right in matters on which the established authorities are wrong.”